Where we will live in the future has become an important consideration for architects.

By 2100, the world’s population could increase to 11.2 billion, and it is estimated that almost all population growth will occur within our cities.

Resulting from an increased demand for space within urban areas, architects are building and designing structures of the future.

As we move forward and replace older designs, new builds will help to accommodate our increasingly complex living-needs.

Oasys, specialists in building design software explore these cutting-edge structures, and how they have become a reality.

Structures made from timber are becoming more structurally sound, and for architects this means replacing structures built from metal. This is because many are now praising its sustainability and quality, whilst realising how fast a structure can be built.

This is because CLT (cross laminated timber) regulations are sparse. With its improved strength and stability due to more sophisticated engineering techniques – wooden skyscrapers are becoming a thing of the present – not the future.

In Hackney, Wenlock Cross is perhaps the most impressive new structure that is being created with CLT. More commonly known as The Cube Building, standing at 6,750sq metres, the scheme is a hybrid mix of timber and steel.

The building seamlessly blends into grass parks that surround the area, but also looks right at home amongst other urbanised buildings that make up London’s metropolitan landscape.

As developments progress in the construction and implementation of timber structures, only time will tell how wooden buildings will influence the future of architecture. 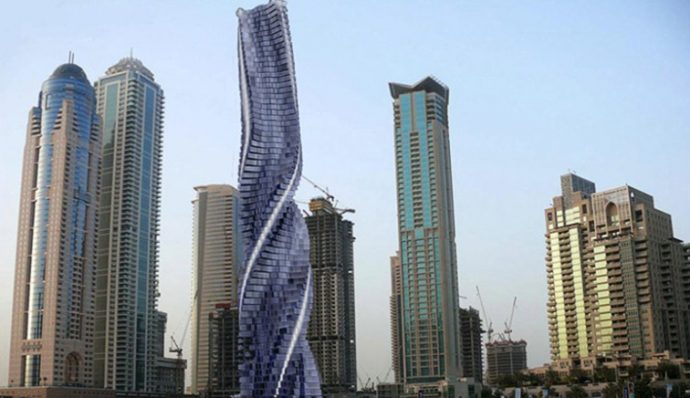 Designed by David Fisher, Israeli-Italian architect, downtown Dubai is about to host the world’s first rotating skyscraper. The structure was originally proposed in 2008, but after being put on hold, the structure has now been set for completion by 2020.

This four-dimensional structure will change shape as it rotates, which means that in theory the apartment block should never look the same twice.

Though each apartment will be able to rotate 360 degrees independently, the speed will be adjustable, and the stationary core will contain the elevator with apartments off-shooting this core.

When it comes to environmental design – this new superstructure is an innovative one of a kind. The structure is proposed to power itself, as there will be wind turbines between each floor, negating the need for excessive power supplies from fossil fuels.

An apartment will not come cheap, with prices set to be at around US $30 million. This is an exclusive project for those who want to pay the price to be at the forefront of innovation.

Unlike buildings designed in the West, architects in the East are utilising the natural greenery that is native to that country. The East intends to build structures that encourage biodiversity, helping tropical spaces thrive within natural environments. 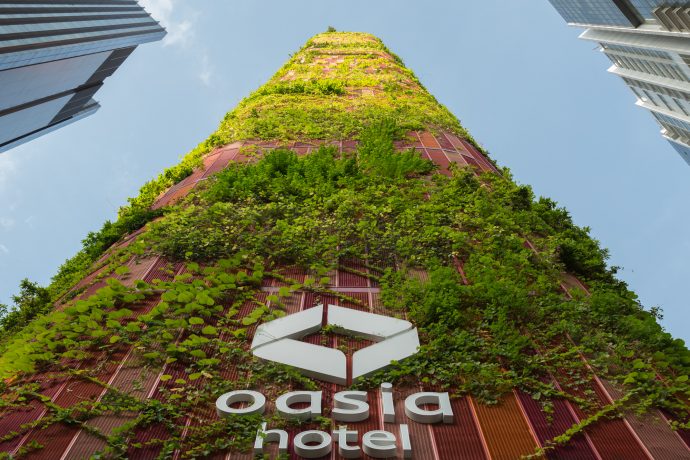 In Singapore, this hotel stands tall against the urban backdrop; this hotel functions as a vertical garden amongst limited green spaces.

This tropical skyscraper counteracts the Central Business District within the Tanjong Pagar area, and is meant to act as a prototype for how urbans tropics will function within man-made landscapes.

Functioning as additional ‘ground levels’, the tower is made up of additional levels within its structure, providing public areas for recreation and social interaction within an inner-city environment.

Each sky veranda is open sided, which provides natural breezes to pass through the building for good cross-ventilation without the need for air-conditioning units.

The building is also considered a natural haven for wildlife, with an overall green plot ratio of 1,100% – reintroducing biodiversity into the city that was initially driven away through construction.

Unlike a conventional light house, it is named in this way because through its round structure and sophisticated façade designs, the building is able to gain 200 LUX natural daylight for all working spaces – making it one of the first zero carbon buildings in mainland china.

When it came to the design of this building, China’s vast and natural foliage was the inspiration; in this way, the natural landscape becomes as important as the building itself.

Through natural ventilation techniques, exposed windows and movable skylights, anyone can enjoy this working space that incorporates natural designs.