Marketing a brand effectively really is an art.

It takes time, creativity and a lot of careful thought to make sure that the way you market your company not only looks good but is time-appropriate and non-controversial as well. Whether it be basic flyers and business cards, or much larger-scale TV adverts, getting your brand’s message clear and on-point is vital to ensuring success.

In the past, some of the more major brands have really messed up when it comes to their marketing campaigns. They’ve caused outrage, controversy, and have lost a lot of customers, money and face in the process.

Here are five of the best examples of where marketing has gone wrong, and what could have been done to prevent the campaigns from turning out so badly.

Jumping on the bandwagon of political activism is never a great idea and, back in 2017, Pepsi did exactly that.

Taking inspiration from the plethora of women’s marches, Black Lives Matters protests and demonstrations outside Trump Tower, the fizzy pop brand managed to undermine the importance of all three in one two-minute advert.

Featuring model/reality ‘star’ Kendall Jenner, their advert suggested that all of the world’s problems could be solved – and that no protests would be required – if we all just calmed down and shared a Pepsi together. People became incensed, and the internet responded accordingly, stating that Pepsi had crossed the line, making light of a range of serious issues. The ad was pulled and Pepsi have held their tail between their legs ever since.

The Lesson: While it’s important for marketing campaigns to be current, think twice about utilising more controversial issues as chances are, you’ll end up upsetting a lot of people.

Back in 1985, the big-wigs at Coca-Cola found via a number of taste tests that people preferred the sweet flavour of their big rival Pepsi. This resulted in one of the biggest marketing calamities of all time when the drinks manufacturer decided to release their improved offering: New Coke.

So, what happened next? A global outcry, that’s what.

Despite focus groups actually finding that people preferred the flavour of the new coke, people were angered that the company had decided to change such a staple of American culture. In fact, Coca Cola even had to hire psychologists to help their staff cope with the number of complaints they were getting about the new release.

The Lesson: Don’t mess with something that’s so embedded in people’s lives. Or, if you do want to change it up, make sure you ask the people for their advice before going ahead and doing it anyway.

One of the biggest marketing gaffs of recent times, Budweiser had to learn the hard way to not be ignorant towards rape. Describing their Bud Light beers as ‘perfect for removing ‘no’ from someone’s vocabulary for the night’, members of the public were incensed at the brand’s insensitivity and gusto attitude towards date rape.

How they didn’t realise what the implications of what their slogan would be, I don’t know – but it didn’t even stop there. Budweiser then followed up their newly-branded beers with a Twitter marketing campaign entitled #UpForWhatever which, unsurprisingly, only added to people’s fury.

They later apologised for the campaign but it was all too little too late – the damage had already been done.

The Lesson: Think twice about running a campaign with a potentially controversial slogan. Test it out on focus groups before broadcasting it out to the masses. 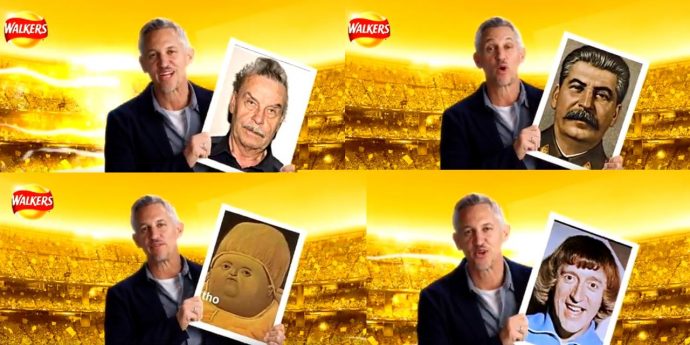 In what was a good idea on paper, the #WalkersWave campaign turned out to be a bit of a hilarious disaster. The idea behind the PR stunt was simple: tweet a selfie using the hashtag for a chance to win a ticket to the UEFA Champions League final. That selfie would then be converted into a video featuring ex-footballer Gary Linker holding the picture, before being uploaded to Walker’s Facebook account.

While this may all sound fine so far, where the crisp brand went wrong was not monitoring the selfies that came in. With the internet being the internet, people submitted tons of photos of mass murderers, sex offenders and dictators which were later published out to the masses by Walkers.

Seriously, when will these brands learn?

The Lesson: If you’re going to run a marketing campaign that automatically publishes content to your social media accounts, make sure you monitor it carefully. The internet can be a cruel mistress.

Back in January 2018, H&M decided to release a new range of kids clothing featuring a variety of animal-based slogans. Using a young white boy to model their new orange hoody, featuring the ‘Mangrove Jungle: Official Survival Expert’ strapline, was fine – it was the green hoody that caused the controversy.

Featuring the slogan ‘Coolest Monkey in the Jungle’ slapped across its chest, the fashion giant released an image on their website of an African-American child modelling the hoody. This unsurprisingly led to outrage across the planet, with many customers calling the company out for their lack of taste and cultural sensitivity.

The Lesson: Be careful about the images you present and think twice about whether it could cause offence or not. If it is likely to, don’t publish it – it’s that simple.

Whether you’ve just moved into a house with an old, tired kitchen or you’ve lived at your current property for a few years and…